This article was written by Martin Guldberg – www.klangheim.com

Compressors can be used for many different purposes in the mixing proces. Obviously they are used to control the volume or amplitude of an audio signal – be it a single track or a group track or the whole mix.

But that explanation is too simple to cover the uses and functions of audio compressors. In some cases you may only want to control the peaks of an audio signal while in other cases you want to let the peaks or transients through without affecting them and instead compress the rest of the audio signal to give the sound more body.

A compressor can be used somewhat like a transient designer by the way you set the attack and release times, and you can also use some compressors for a saturation effect.

This brings us to the different types of compressors and in which cases you may want to choose one type over another.

The four main types of compressors from the analog realm are the VCA compressor (voltage controlled amplifier – an example of this type is the dbx 160), the OPTO compressor (like for instance the LA-2A), the FET compressor (field-effect transistor – the most famous example is the Urei 1176), and the Vari-Mu compressor (a tube compressor – one famous example is the Fairchild 670). All of these are emulated in modern plugins and it is helpful to know a little bit about how they function to be able to chose the right compressor for the task at hand.

VCA compressors tend to be fast and transparent (low distortion) audio compressors. Because they can work with fast attack and release times they are able to handle transients and micro dynamics and can control peaks or transients in a very transparent way. This makes it an exellent choice for drums and percussive sounds.

VCA compressors are versatile. In many cases you can tweak them to work in a more smooth way with lower attack and release times. So whether you are looking for RMS compression (meaning average volume control) or transient or peak control it can be the right tool.

When you need a trasparent, clean compressor – for instance when you deal with a 12-string guitar, a zitar, a harpsichord, or an acoustic piano which all may not respond well to distortion – the VCA compressor can be a good choice.

Of course a lot depends on what VCA compressor you are using. A flexible example could be the API 2500 which has fully adjustable attack from 0.03-30 milliseconds and release times from 50 to 2000 milliseconds.

And as a final example the dbx 160 VCA compressor has program dependent attack and release times where the attack can vary between 3 and 50 milliseconds and the release between 8 and 400 milliseconds (there are variations between the different dbx 160 models).

OPTO compressors on the other hand are generally speaking relatively slow audio compressors and some models are not as sensitive to transients and sudden peaks in the audio signal as most VCA compressors. For example the LA-2A OPTO compressor has program dependent attack times starting at 10 milliseconds (the LA-2A).

If you use an OPTO compressor on the mix bus or when mastering be aware that bass heavy material can cause audible pumping (unless you use a sidechain filter).

Again, a lot depends on the model in question. As stated above the Tubetech CL-1B can compete in fastness with several VCA compressors and thus works well on almost any sound material.

If VCA and OPTO compressors tend to be transparent the FET compressor does not. It definitely has character and a FET compressor colours the material you run through it. However, it is a colour and a character that we like and that is sought after and therefore FETs are very popular audio compressors.

A FET compressor can be very fast and is very much associated with the sound of rock music. It can be used on a variaty of material such as drums, vocals, bass, percussion, guitars etc. and can add a rich, ”gritty” sound (saturation).

Urei 1176 and later the Universal Audio 1176 are classics that many other companies have tried to clone and a more affordable yet well sounding modern clone is the WA76 by Warm Audio.

The FET compressor can be used on all sorts of instruments and definitely on vocals too. It is normally not suited as a mix-bus compressor (unless maybe if it has a sidechain filter) but it is sometimes used on the mix-bus without any compression going on simply to get the colour of the FET compressor as an added spice to the mix.

Vari-Mu compressors use tubes for compression. The are slow compared to FET compressors and some VCA compressors but again a lot depends on the model in question.

The Fairchild 670 Vari-Mu compressor has attack times as low as 0.2 milliseconds (but relatively slow release times between 0.3 seconds and 25 seconds (sic!) plus an auto release option).

The Manley Vari-Mu Compressor has a variable attack from 25-70 milliseconds (and five steps of recovery / release: 0.2 seconds, 0.4 seconds, 0.6 seconds, 4 seconds, and 8 seconds).

The Vari-Mu compressor is perfect for smoothing out things and adding warmth and texture to the audio. It is often used as a tool to glue a mix together since it is capable of delivering very smooth compression and a nice saturation.

Because of its warm and rich ”tuby” tone a Vari-Mu compressor can work wonders on the mix-bus even without using any compression but simply as a couloring tool. This is a well known mix-trick with the Fairchild 670. For the same reason it can be used to ”warm up” recorded material that sounds ”thin” or ”thrill”. It can also add texture and is a good choice on vocals if you want to make the sound lush and full.

There are other types of audio compressors than the above mentioned. For instance the Neve 2254 compressor works in a different way sometimes called diode bridge compression. It has a dark and warm sound – adding what some people call a ”chocolate-timbre” to the audio material (also good for ”warming up” shrill recorded material simply by running it through the 2254 without compression). But the above mentioned are some of the most commenly used audio compressors. 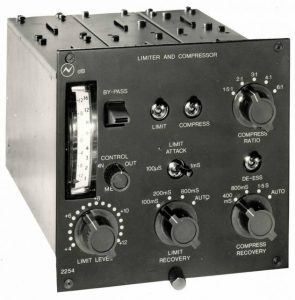 In a feed-back compressor the control circuit receives the audio signal after it has passed through the amplifier stage, and this is an older approach which you will find in most vintage compressors.

Feed-forward compressors can be very controllable, i.e. it can be easier to get them to do exactly what you want them to do. Feed-back compressors are said to work in a softer or more ”musical” way but it all depends on the compressor and the effect you are aiming for.

Chaining audio compressors is a way to combine the best of two or more worlds. For instance a combination of a FET compressor and an OPTO compressor on a vocal track can work well. The FET will deal with the fast spikes in volume (and add ”gritt” / saturation) and the OPTO will smooth out the volume in a much softer way. You could even throw a Vari-Mu compressor on the end of the chain to add warmth and fullness.

Since compressors tend to work in a more transparent way (without unwanted artifacts in the sound) when they are not pushed too much it can even make sense to chain the same type of compressor with itself. Each compressor instance will then do a little of the work you want done without getting ”exhausted”.

There are plenty of digital emulations of both vintage and modern compressors. For instance you will find many good emulations of the Urei 1176 FET compressor from both Waves, Softtube, UAD, IK Multimedia, Stillwell, Slate Digital, and several other companies. They are all good but they are also all different in sound and response. This is quite natural especially when you consider that even the original hardware units did not sound completely alike. Since they were made by analog components there were slight differences even among units from the same manufacturer. In other words it is often not so much a question about which emulation of a certain hardware model is best. They may all have their useages – it may just be slightly different usages.

Digital compressor plugins can be emulations of classics but they often have extra features that the hardware may not have had. For instance the developer may have added a sidechain filter or a mix knob.

Since there are far less limitations in the digital realm you may even have the choice between OPTO and VCA compression style in one and the same plugin. This is the case in for instance the free compressor plugin from digitalfishphones, ”Blockfish”. With this plugin you can even “take off” / “lift” the front cover of the GUI and tweak parts in the inner circuit.

In other words developers get playful and come up with all sorts of nice features that give you added control and often are only possible in a digital plugin.

To find examples of this and to be introduced to a variety of free compressor plugins check out the FREE VST section of this site.