Below you will find a list of free compressors with links to the respective download sites. If you scroll down further you will find descriptions of the listed compressor vst plugins.

The vst plugins mentioned may be working either on PC or Mac or on both and a few are 32-bit only. However, by the use of a bit bridge and / or a plugin-adaptor (like jBridge, 32 lives, DDMF Bridgewize or Blue Cat’s Patchwork) you should be able to use these vst plugins in almost any DAW. In Klangheim Studio we use Cubase in combination with jBridge and that works like a charm without any hickups. You can read more about bit bridging in our article About Bit Bridging 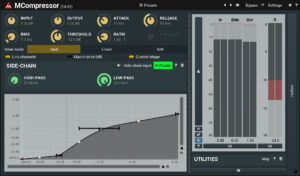 MCompressor is a very nice and very versatile vst compressor plugin. It has a good graphic user interface (GUI) that gives you good visual feedback about what you are doing both in terms of how you are compressing (soft knee, linear, or hard knee) and how much gain reduction you are employing.

You have full control over attack, release, ratio and threshold and you can target either the audio peaks or the average loudness (RMS) of the incoming signal – or set up the MCompressor to target the audio signal somewhere in between these two.

MCompressor also has a sidechain and a highpass and lowpass filter which makes it extraordinarily flexible. It comes with the Melda Free Bundle that includes quite a few other nice vst plugins. Highly recommended.

DCA1 by Klanghelm (Windows and Mac) 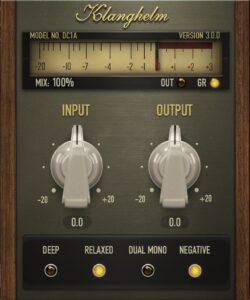 The DC1A compressor from Klanghelm is a simple yet powerfull free VST compressor plugin. If you are a beginner this could be a good compressor to learn by since it is very easy to tweak plus you are forced to use your ears and not rely on numbers.

The DC1A is resembling an OPTO compressor. Its attack and release timings are program dependant although you have the choice between a faster response (which is the default mode) and a slower response with the ”relaxed” mode engaged. It has a fixed threshold and the more you gain the input the more compression you will get.

Use the output knob to match the compressed level to the uncompressed. This way you will not be fooled by differences in loudness between the unprocessed and the processed audio.

On stereo tracks you can compress the left and right side separately by enabling the ”dual mono” mode and Klanghelm has also given us an internal sidechain high pass filter which comes in handy when you want to keep the low end more intact (for instance on the drum bus). Finally you have the option of using negative compression ratios.

So, even though the DC1A looks simple at a first glance it is quite surprisingly versatile and can work well on many different types of audio material from drums and percussion to vocals, guitars, and keyboards. It is a very good sounding free VST compressor and should you want even more flexibility you should check out its ”big brother”, the DC8A, which is a high quality compressor with a lot of tweakability for just a little more than 20 US Dollars.

Yet another simple but powerful vst compressor plugin by Klanghelm. MJUC jr is a scaled down version of the amazing MJUC compressor plugin by Klanghelm. However, the MJUC jr still gives you a little of the flavour that you will find plenty of in its bigger sibling. Both plugins are emulations of  the Vari-Mu compressors type and thus they add quite a bit of tube coloration / saturation.

With just a few controls – compress, make up gain, and a choice between three time constants (fast, slow, and auto) – the plugin is very easy to operate and you may be surprised about how much you can get out of this scaled down version. If you need more control and would enjoy playing with a lot of extra parameters you can buy the full version for very little money.

TDR Kotelnikov is a free VST compressor designed primarily for mastering purposes. It can function in a very transparent way and will definitely also find it’s use as a channel compressor or a group bus compressor.

You can also control the stereo sensitivity and chose whether the compressor should work on the full stereo audio or on the mid (”sum”) alone or the ”side” (”diff”) alone. If you want to dial in both mid and side compression and control these individually then you can simply use two instances of TDR Kotelnikov.

TDR Kotelnikov offers an internal sidechain function which gives you the option of relaxing the way the compressor responds to low end frequencies. There is also a mix option for parallel compression.

TDR Kotelnikov is a fabulous free VST compressor plugin and it is amazing that you can get this quality for free. For mastering it is one of the best free vst compressors around. Highly recommended.

Should you want even more options there is a ”Gentleman’s Edition” at a very affordable price.

Thrillseeker LA by Variety of Sound (Windows only)

This is definitely one of my favorite free VST compressors and probably the one free VST compressor that I use the most. The Thrillseeker LA is a very versatile compressor. In many ways it works like an OPTO compressor but although some people on the internet describe it as a free version of the LA-2A it is much more flexible than that.

Yes, indeed, the Thrillseeker LA can work very much like an LA-2A but you have many extra options on this Variety of Sound plugin. First of all you have faster attack times (both attack and release times are dependant on the incoming audio material – just as is the case with the LA-2A – but you can tweak and control the timing to some extend with the attack and release knobs).

This means that it is possible to tweak the Thrillseeker LA to work very much like a dbx 160 when it comes to timing – or a Tubetech CL-1B as well as a Fairchild or an LA-2A compresor.

Variety of Sound has also given us control over the total harmonic distortion (THD) with the interstage section. Once you have found the right amount of compression and adjusted the attack and release to your liking you can turn on the interstage section and add 2 order harmonics. If you want to go further than that you can use the slider to add even more THD and obtain thicker saturation effects.

Finally you have the ability to colour the saturation effect to your needs and even switch on a transformer circuit simulation to fatten up the sound even more.

Thrillseeker LA has internal and external sidechain options and in the top left corner you will find a little knob that calibrates the plugin to a conservative (and advisable) mix level of -18 db.

In other words Thrillseeker LA can work as a clean compressor or as a more vintage sounding unit. It can work with much faster attack times than an LA-2A and it has its own little colour tool box in the interstage section.

You can use it as a channel compressor or indeed as a bus compressor. And last but not least: it sounds amazingly good. It proves that free plugins can sound as good as commercial plugins – and be more innovative than most of them! That is just one good reason to dive into free VST compressors and other free VST plugins. Highly recommended.

The SAFE Compressor is special in the sense that it allows you to type in more intuitive or descriptive terms or words into the plugins textbox – such as for instance bright, warm, punchy etc. – and if the word or term is on the developers server the compressor will be set to parameters that can bring forward the wanted and described effect.

You can save your own suggestions for semantic terms that represent a compression effect and it can then be shared with other users via the server. In other words SAFE Compressor is a unique intuitive compressor that may be of special interest to beginners. 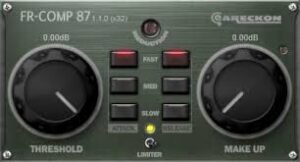 FRComp87 is a delightfully simple vst compressor plugin. It only has a few controls: threshold, makeup gain, and three timings (fast, medium, and slow). Finally, you can switch in a limiter to tame peaks after the compression. Because of the simplicity FRComp is very fast to use and may be just the right starting point if you are a beginner when it comes to compression.

The developer de la Mancha has created a really good free VST compressor plugin inspired by the dbx 165 A compressor. However, de la Mancha’s Sixtyfive gives you several extra options compared to the hardware which inspired his work.

If you are looking for a dbx-style compressor plugin Sixtyfive is a good choice. It sounds very good and adds a little, nice coloration and character to the audio material you run through it.

De la Mancha has given you extra features like a dry/wet knob which makes it easy to dial in ”New York” or parallel compression. While the fastest attack on the original hardware is 1 millisecond de la Mancha lets you dial in even faster timings. Like the dbx 165 A de la Mancha’s Sixtyfive also has an auto attack and release button which activates a program dependant attack and release response. It also features a peak stop option for hard limiting on the final output.

Sixtyfive is a soft knee compressor. You can tweak it to give you smooth, musical compression or to work in much more agressive ways. So if you need a vintage style VCA compressor plugin with extra features you need look no further.

GComp by GVST (Windows and Mac) 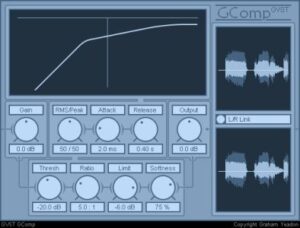 With the GComp vst compressor plugin you have full control over attack, release, threshold, hard knee or soft knee or anything in between as well as dialing in the balance between how the compressor should react to audio peaks versus RMS (the average loudness of the program material). On top of that it also includes a limiter.

You can adjust the input and output volume and GComp gives you a good visual feedback of what is going on and how much compression you are applying.

GComp has a sibling called GComp2 with a few different parameters that you could check out as well.

If you are interested in older plugins you can check out these: